(This is a repost from about a year ago … but I wanted to repost again for a couple reasons. First, I had good response. I have also taught it to kids and they quickly caught on, so I thought I’d pass it along again.)

But second, when I first did this for my Sparks group, I had an excellent piano player who also wrote songs that went along with what I was teaching. Ruthi Smith was so talented in writing tunes for the kids to learn. When I posted this the first time, I could NOT find Ruthi’s song anywhere. This week, I was looking at some family genealogy and inexplicably found it tucked in my mom’s history papers. Go figure.

Ruthi passed away this fall. A great lady whom we all miss. I so appreciated the songs she wrote. Enjoy the song and use it with your personal and ministry kids to help them remember what to do when they’re tempted. Song is at the end of the post.)

“But what if I don’t know if something is wrong?” The eight-year-old looked troubled. “Then what do I do?”

And I came up with this – something easy for the kids to remember.

Stop and walk away.

Then I take the time to pray.

What does the Bible have to say?

First, I encourage them to STOP AND WALK AWAY from the situation as quickly as they can. I tell them a story of my brother who thought what his friends were doing was wrong, so he went home … just before the police showed up. I use 2 Timothy 2:22  and emphasize that the Lord tells us to flee when we see something wrong (or aren’t sure about something) – not simply slowly walk away. 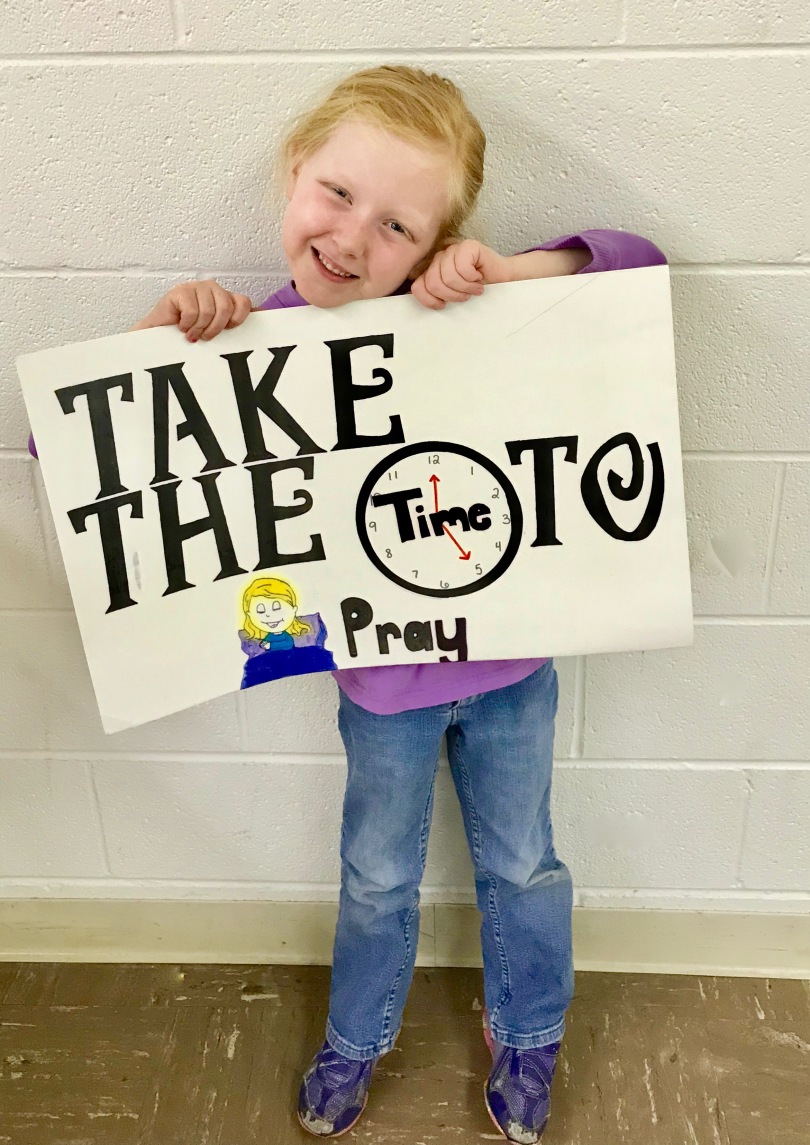 Second, TAKE THE TIME TO PRAY. Talk the situation over with the Lord. Ask the Lord for wisdom and courage to do the right thing. (I put prayer second, because I don’t want them remaining in the situation, silently praying, and meanwhile give the situation time to escalate.) Matthew 26:41 is one verse to use for this.

Third, DO DAD AND MOM SAY IT’S OKAY?  Okay, they’ve gotten out of the situation, they’re praying about it and now I encourage them to find Dad or Mom. (A lot of times tough situations happen at school or at the park or somewhere when parents aren’t readily available.)  Proverbs 1:8 is one of many verses I use here. Any verse that talks about the wisdom of parents or obeying parents will work.

The illustration I use is one that makes the kids eyes widen in disbelief – but yes, this truly happened. My father-in-law grew up in the hills of Pennsylvania. When it snowed, he and his friends liked sledding down the hilly streets. One street in particular was extra high, and his friends loved playing on that one. However, at the bottom of the street was a cross street so his parents told him never, ever to sled down that hill. The bottom was too dangerous.

But one day, he decided to do it anyhow because his friends were taunting him and he didn’t want to seem like a coward.  He ignored his parents’ rules and took off. As he went down the hill, he gained speed until he was going so fast there was no chance of him stopping. And then he saw it – a semi-tractor trailer traveling on the cross street. His sled kept speeding on and the timing was exact for him to meet the street at the same moment as the semi. He was going too fast to stop and figured that was the end of life as he knew it.  He went flying right between the front wheels and the back wheels. Whoa! Unbelievably he made it out the other side alive! But he decided that his parents knew best and when they told him to get away when his friends tempted him to go down that hill – he should’ve listened to them. 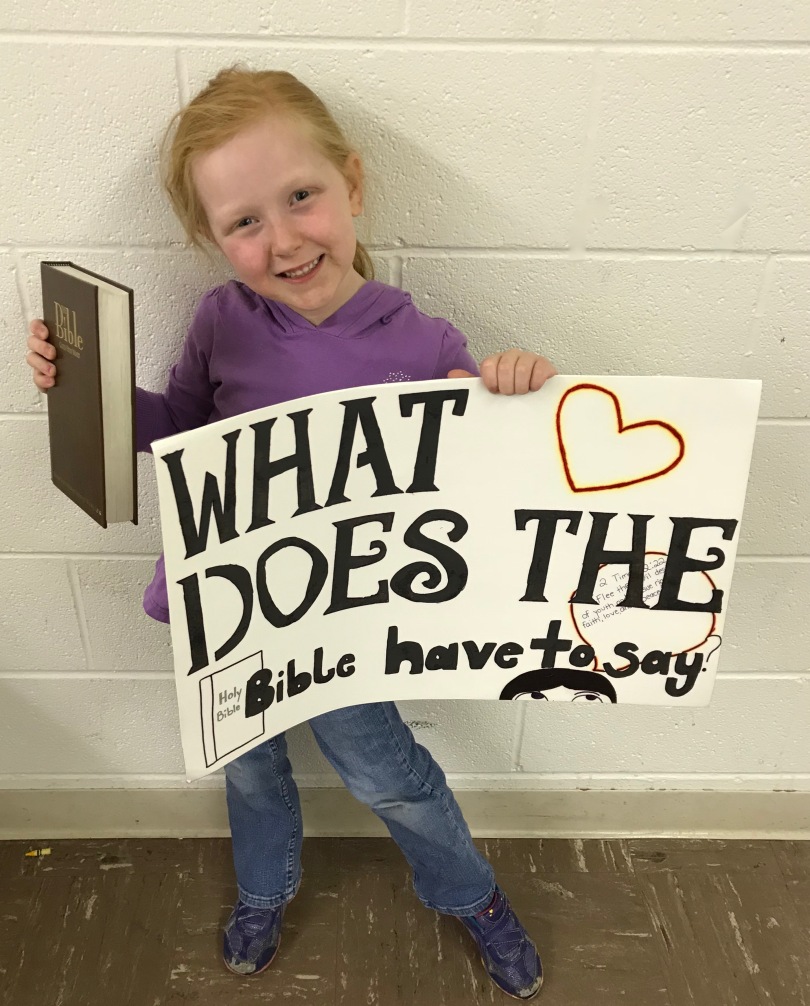 Fourth, WHAT DOES THE BIBLE HAVE TO SAY? Although kids will know some of what the Bible says about certain situations, they won’t know everything and often parents (or a teacher) will need to help them. At this point, when teaching this in a classroom setting, we look up various verses that talk about what’s right and wrong.

I’ve found that these four principles stick well in a child’s mind. We often review them or I’ll ask them how they used them throughout the week.

(Thanks to my model, S. and thanks to my graphic designer granddaughter Belinda, who is now in her second year of college, but did these when she was in middle school. I know she’d want me to make that distinction. 🙂 ) 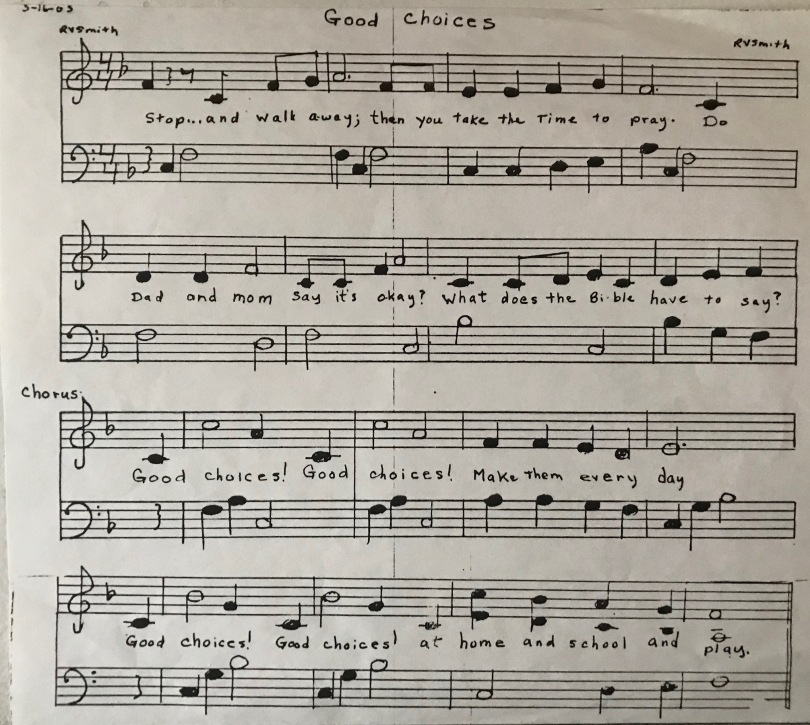